HOME
ABOUT
OUR WORK
FOOD FOR THOUGHT
THE KOI POND
98THINGS
H.U.G
CONTACT

Social media is fake: true or false? In a sea of curated images, influencer content, and sponsored posts, it’s easy to say that it is. It’s why many Gen-Zs have flocked to TikTok or BeReal to connect more authentically with those around us. We often tell brands and influencers to “be authentic” – but what does that really mean? Are any of us authentic on social media?

We can all agree that Instagram is in its flop era. Right? Right??? It went from being a space for us to update our friends on our lives to… not… that…

Instagram evolved from a chronological feed to an algorithm, adding “recommended posts”, and quite frankly has become more about e-commerce and less about sharing photos with your friends. Scroll on your Instagram right now and you’ll see that for every 1 post or story from your friend, there are at least 2 branded or sponsored posts. Don’t EVEN get me started on Reels, which is basically a subpar TikTok for people who are too lazy or too stubborn to get the damn app (I will admit this was me prior to March 2020).

Instagram tried to do everything, that they ended up doing nothing right. As Instagram declined, Gen-Zs took things to their own hands in an attempt to be more real: creating finstas, shitposting, and pushing for “casual Instagram.” But is casual Instagram authentic? Or is it an even greater performance?

We like to blame COVID for a lot of things but COVID did actually play a huge role in the casual Instagram shift. Because we had nowhere to go, no one to see, and nowhere to be seen, our content reflected that. As we’re coming out of COVID (which we better be), we’re coming out with a new social media aesthetic: one that’s blurry, unfiltered, and low-light. 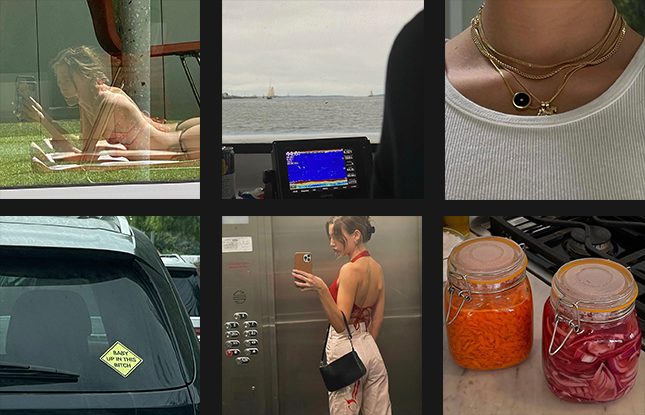 Though these blurry posts are supposed to be more “real” and “authentic”, it’s just a new aesthetic to live up to. As TikTok user @chrisidek says, “Now not only do I have to post a photo of myself, I also need to post aesthetic first person photos that look like I took them by accident to curate the perfect photo dump." Another user comments, "Instead of just posing for a photo now I gotta make it look like I didn't know it was being taken."

The urge for people to be more real on Instagram and to post photos from their daily life was well intended, but like anything on social media, it’s still a performance.

It takes work to be casual on Instagram. There’s a perfect blurry you have to achieve: too much and it’s just messy, too little and it’s too posed. It’s something many top influencers and celebrities have mastered (see: Dua Lipa and Emma Chamberlain). Coming from influencers, it definitely feels more real: like you’re getting a look into their lives, or more realistically into their camera roll. The irony is you actually have to work harder to appear like you're doing less. And the seemingly candid images curated by influencers make you feel connected with them, without having to actually connect with them.

But will this ever stop us from putting on a show? After all, anyone on social media has been performing a particular version of ourselves in some way, whether we intended to or not.

What are we trying to prove? Why do we care so much about social media? Why does it matter what we post online? For many Gen-Zs who’ve grown up with social media, profiles on platforms like Instagram have become part of our personal brand. It’s self expression and identity as much as something like fashion is. It’s a natural way for our generation to get to know one another. We’re not only navigating ourselves in the real world, but navigating how we represent ourselves in the virtual world as well.

As a generation that values authenticity so much, we’re constantly in search of self-expression that is as easy and seamless as “being yourself” (though personally, I think “be yourself” is bullsh*t – but we can save that for another blog). If casual Instagram authentically reflected our lives, it wouldn't have to take so much work… but then again, maybe performance isn’t so bad. No matter where we go or who we’re with, we’re performing a version of ourselves to match the circumstance. Instagram and social media are just another one of those circumstances Gen-Z’s have had to add to their roster.

Maybe the secret sauce is not caring about being “authentic” because what the hell does that even mean? Post freely, and leave it at that.

Ready to get started?
Get Started
Subscribe to our
newsletter
Thank you! Your submission has been received!
Oops! Something went wrong while submitting the form.
Services
BrandingSocial Media ManagementGen-Z ConsultingInfluencer Marketing
About
About UsFood For ThoughtThe Koi PondCareers
Contact
Contact Us
Terms & ConditionsPrivacy Policy
8704 S Sepulveda Blvd PO#1038, Los Angeles, CA, 90045