HOME
ABOUT
OUR WORK
FOOD FOR THOUGHT
THE KOI POND
98THINGS
H.U.G
CONTACT 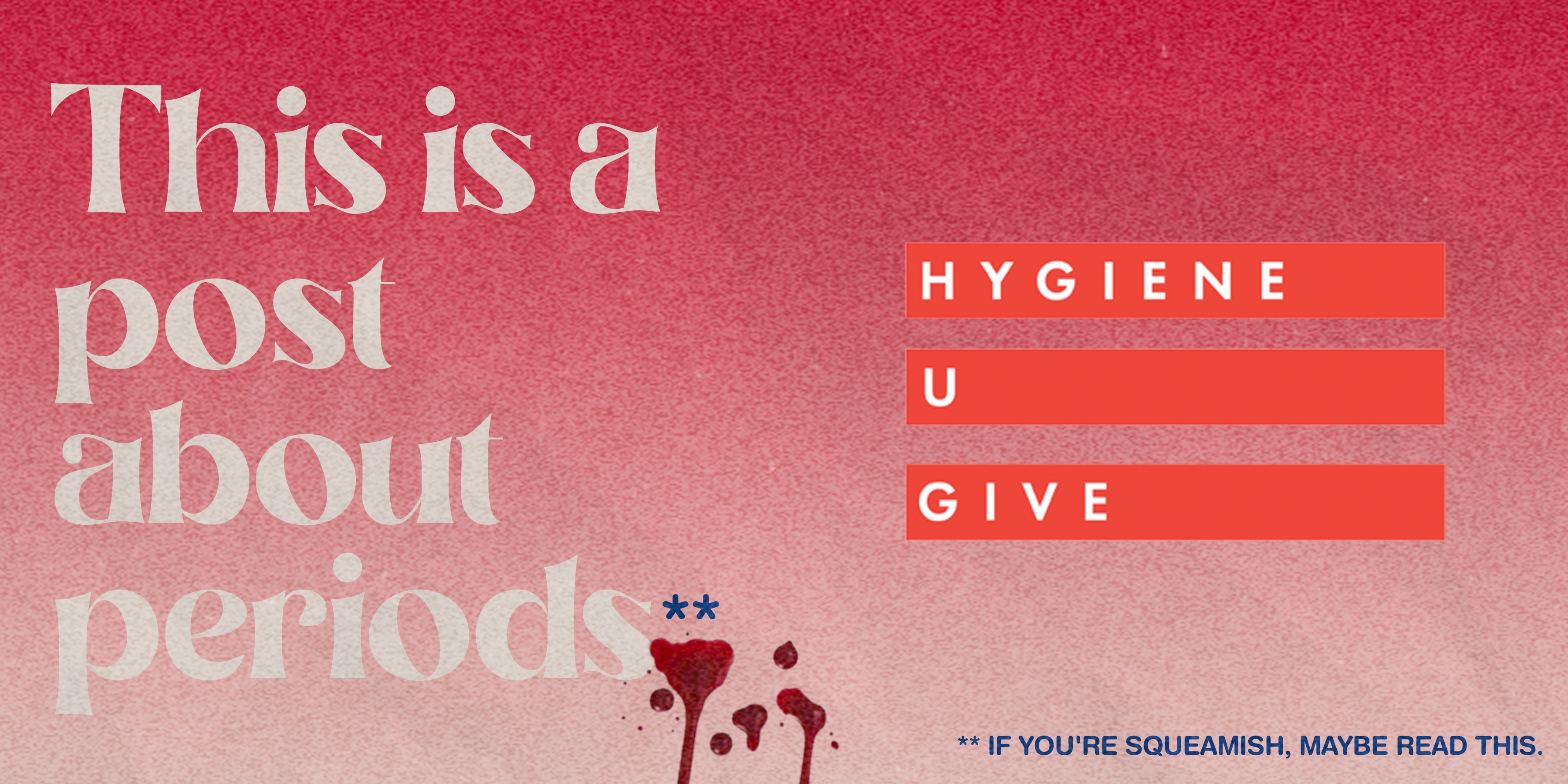 If you scroll through NinetyEight’s Instagram, you’ll notice we regularly have a “that time of the month” post to talk about Hygiene U Give. But what exactly is Hygiene U Give?

I can’t tell you that story without telling you about my first time working with Bryant, back when we were juniors in college. It was our New World of Branding and Advertising class, the first class of the M-School curriculum. We were already nervous about impressing our professors, and then we heard about the assignment: Positively impact at least 1,000 lives through a meaningful product and campaign.

We brainstormed for hours with our other group mates. Finally, H.U.G. was born after we mapped out where our group’s values intersected: democratizing basic necessities, sustainability, and helping out the less fortunate in a community outside our own. However, when we approached our professors with Hygiene U Give, we were told to choose any problem besides this one, in fear that we would exclude men from the conversation.

After winning $2k in funding from TOMS Shoes and an extra $1.5k on GoFundMe, we began our activations - all meant to fund hygiene packs for the Downtown Women’s Shelter in Los Angeles. This included:

We also taught people about the Pink Tax in an unconventional way. This is how people reacted when they realized how f*cked up the stigma around menstruation is:

We painted the campus red after seven weeks of campaigning nearly every school day. By the end of the project, however, it became less about our grades and more about the people we initially set out to help. After only 7 weeks, our group raised enough money to donate 700 H.U.G. packs to the Downtown Women’s Shelter in Los Angeles! And so, our project ended and we all got As.

When we founded NinetyEight, we were looking for ways to give back to our community -- especially during the COVID-19 crisis, we could not in good conscience start a business just for the sake of money… after all, why would we preach that Gen-Z demands brands to authentically give back to the community if we weren’t going to do the same?

As a majority woman-owned and led business and as an homage to our M-School roots, we decided that Hygiene U Give would be our company for-good initiative, which would grow alongside us. We were all passionate about the cause and Bryant and I were so excited to be re-starting this campaign (with the permission of our original team, of course).

We partnered with Summaeverythang Community Center, a community center based in Los Angeles “dedicated to the empowerment and transcendence of black and brown folks socio-politically, economically, intellectually and artistically.”

Founded by Lauren Halsey, Summaeverythang donates weekly produce boxes to low-income communities in South Central and Watts. “I began it as a space to support and sustain all sorts of intelligence in the hood—from academic to intellectual. Summaeverythang. Capoiera, tutoring, artmaking, film programs, gardening, field trips, etc.” The center is a site to develop Black and Brown empowerment: personal, political, economic, and sociocultural.

One of H.U.G.’s main drivers is collaboration -- not only with Lauren, but with the community at large. Since publicizing H.U.G. as NinetyEight’s initiative, we’ve partnered with multiple student organizations at our alma mater to fundraise on a bi-monthly basis. Members of our online community have also made generous donations and purchased supplies from our Amazon wishlist for these packs, which we assemble in our office every first week of the month. Thanks to all the donations, we were able to raise over $1,000 in one week and have donated over 300 H.U.G. packs in total so far!

In addition, we’ve pledged 1% of our profits (forever) to this cause, and are looking forward to doing more fundraisers on a bi-monthly basis. If you or your business are interested in collaborating, feel free to contact us or check out our Amazon wishlist to see what types of donations we accept.

Ready to get started?
Get Started
Subscribe to our
newsletter
Thank you! Your submission has been received!
Oops! Something went wrong while submitting the form.
Services
BrandingSocial Media ManagementGen-Z ConsultingInfluencer Marketing
About
About UsFood For ThoughtThe Koi PondCareers
Contact
Contact Us
Terms & ConditionsPrivacy Policy